When it comes to Scorpio, it’s all about their mysterious and secretive nature.

If you think you know this person well, then you may be wrong. Things they reveal to you are just the tip of the iceberg. In fact, they are unpredictable creatures. This makes it super hard to figure out what is going on in their heads.

For those who are having a crush on Scorpio man, catching hints from him is super hard. But, nothing is impossible. With signs that a Scorpio man has feelings for you in today’s article, we’re here to make things crystal clear for you.

How to Know a Scorpio Man Has Feelings for Me? 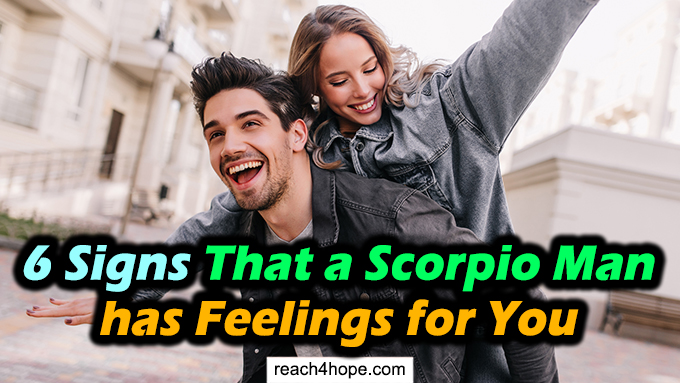 1. He has everything you need in a guy

Scorpio man falling in love with you will try his best to provide everything you need.

Though it takes him quite a long time to actually fall for someone, he falls hard once finding the right person. When it comes to love relationships, he goes all in. Compared to other men, Scorpio is the most devoted and loyal. Many claim that he often spends time for and cares so much about the woman whom he has feelings for.

Being with this guy and you’ll realize that he is extra nice to you. No matter what you do, he will help you out at any time. However, this won’t last once he finds out he is taken advantage of.

This guy is born with generosity and giving nature.

2. He will chase after you

Most Scorpio men seem to have low-key and calm attitude. But, if you think that they are shy, then you are so wrong. He’s definitely not the type afraid of showing affections. The moment he finds you interested, he will start his pursuing plan.

If a Scorpio male feels like developing a liking towards you, he’ll grab more chances to spend more time with you. Don’t be surprised if he usually asks you out, sits next to you, and makes calls or sends messages. In general, he will do anything that keeps both of you connected.

Of course he won’t make you feel like he is clingy.

The way Scorpio man pursuing you is always grace and exciting.

You will know that a Scorpio man has feelings for you when he becomes your ear for secrets. Why? Of all zodiac signs, Scorpio is the most trustworthy when it comes to keeping others’ secrets.

He is the first person that you can trust to share you secrets. Never interested in gossiping here and there about anything, he will put your secrets in the deepest corner of his heart and never open it for anyone to have a glimpse.

If you know a Scorpio man well, then you must also know that his greatest strengths are trust and loyalty. In case you are worrying about something, just tell him. He won’t mind lending you both of his ears and even his shoulder to cry on.

Related: When a Scorpio man touches you…

4. He will put down his guard

We all have trust issues, and it’s not easy to open up emotionally because we don’t know if the person whom we get involved with is reliable or not. Scorpio is not an exception in this case; indeed, he needs a long time to trust someone due to his insecurity.

Then what happens when he finds the woman of his dream?

As soon as he’s certain about his feelings for her, he will willingly let his walls down. It’s really a rare chance to see a Scorpio living in the world of emotions. Put it simply, you will have both his heart and trust once you two are together. If he makes serious conversations with you, take it as a sign that he sees you more than a friend.

You can confidently tell yourself that you really have a place in his mind if that moment happens, and get ready for his pursuit.

Be honest and genuine when engaging in his deep talks.

If a Scorpio man is interested in you, he can’t help but trying to read you. Not that he plans something suspiciously; actually, this guy just wants to get to know you better, like your personality, habits, likes and dislikes, and other things in general.

That explains why he wants to spend more time staying around you.

Rather than giving you a plenty of questions, he will observe you in silent, including your behavior and attitude towards everyone. He’ll study all about your habits as well as the stuff you love or hate to understand you deeper.

Just stay true to yourself as that’s what he likes the most.

6. He will get jealous

The most obvious sign telling a Scorpio man likes you is here.

Speaking of this guy in love, he’s pretty jealous and possessive. He doesn’t like the idea of his love interest getting taken away. He can’t help but bringing his jealous on display once seeing someone coming close to you or trying to win your attention.

He also can’t stand seeing you showing affections to other guys. No one is allowed to make you smile or laugh but him. The moment his eyes are on you; it means that only him has the right to spend time with you. Of course he won’t make a fuss about this publicly. Scorpio man will keep all emotions in his heart.

But, you can see his jealous stare when having eye contact with him. Moreover, it’s his possessiveness making him so caring and loving to you.

For people who are looking for signs that a Scorpio man has feelings for you, we’ve brought you an article that’ll help you solve this matter. Dive deep into his personality can help you understand him well and strengthen the connection between the two of you.

Though he is a mysterious person, it doesn’t mean he will keep his feelings to himself till the last moment. Be patient and he will soon open up his inner self and even vulnerable side to you.

Nichola Shah has been a tarot practitioner since 2012 – with relatively great knowledge about tarot cards, she is currently working as an editor covering most articles relating to tarot reading topics here. Her goal is to help people realize how the tarot guidance can enlighten and change one’s life positively.

Get your personal Astrology insights
Chat Now »
or